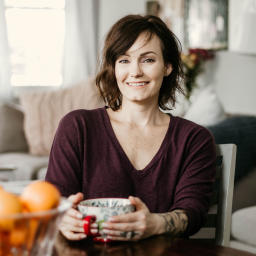 I'm Sunny! I'm a board-certified clinical nutritionist and a licensed dietitian-nutritionist with an MS in Clinical Nutrition. I help women reduce fatigue, eliminate bloat, and lose weight by healing the digestive tract, reversing Hashimoto's, and repairing their relationship with food. I provide individual nutrition consultations in Texas and Nationwide!

How to reduce anxiety when you have Hashimoto’s

Had enough of Hashimoto’s Constipation? How to relieve it…

In working with women with Hashimoto’s, one of the greatest mysteries we uncover for them is reflux. Reflux...as in acid reflux or silent reflux. I find that many with Hashimoto’s Disease struggle with reflux and have no clue they do! It’s because they don’t know what the signs of reflux are. They’re aware of the symptoms but attribute those symptoms to something else.

That problem you have with swallowing may not be a nodule. More commonly, it’s reflux. But because no one ever told you that reflux with Hashimoto’s is common, you have no clue that you have it. Or even what to do about it. Or, better yet, what the crazy symptoms or signs of reflux are!

After reading this article, you’ll learn why you have some odd sinus and throat things happening and how to reduce the incidence of them by focusing on the two main causes for women with Hashimoto’s so that you can begin to heal your body and prevent further damage to your throat.

Keep reading to learn what those two causes are!

Signs of Reflux or Reflux Symptoms

Reflux, most commonly known as acid reflux, is very common. Most people at some point have suffered from acid reflux. And have quickly realized it’s not something they want to deal with on a daily basis.

Reflux may be happening daily and you may be dismissing it.

Not everyone that has reflux has that classic burning sensation in their chest. That’s not an everyday occurrence with reflux. For some, it can be! But for most women with Hashimoto’s, it isn’t.

Before we can get into what you can do to reduce those annoying throat symptoms, you need to understand first what the symptoms are. Most women with Hashimoto’s have several of these symptoms but either…

Nodules can cause some of the symptoms I’m going to go over. But not all. And, it’s not common that a nodule will cause the majority of these symptoms. When nodules happen, the most common symptoms they create are difficulty swallowing or breathing.

But the signs of reflux are much different. They include…

You may be contributing a lot of these symptoms to your thyroid nodule. Or even to allergies. When they are actually happening because of reflux.

As reflux gets worse because of the lack of attention, the symptoms tend to get worse as well. Overtime, unchecked or untreated reflux can cause damage to the throat and the stomach.

Reflux is definitely something that you need to get a handle on.

There are a ton of different reasons that someone can have reflux. Some reasons would be…

There are other reasons but these are the most common. When it comes to Hashimoto’s, the most MOST common are…

This bloat will cause pressure of the LES allowing for acid to get into your esophagus. But that inflammation is going to cause changes to your stomach acid production. And, it’ll create an allergy type reaction in the body (stuffy nose, running nose, etc).

Stress creates changes to the stomach lining allowing your body to be more susceptible to reflux issues. If you’re noticing many of the signs of reflux listed above, you may want to have a think about how well you’re managing your stress and whether you’re consuming foods you’re intolerant to.

It’s important to note that rarely is reflux due to excess acid in the stomach. Taking acid reducers can cause nutrient absorption issues. Especially nutrients like calcium, B12, and iron. Reflux is almost always because of displaced stomach acid.

This really applies to anyone, but especially to women with Hashimoto’s.

I don’t want to spend  a ton of time talking about gastritis in this article because the article is really about reflux. But, I do think it warrants a little chat because unchecked reflux can cause gastritis.

Gastritis is inflammation of the stomach lining. If your stomach is burning, likely the lining is inflamed. The longer this goes on, the worse things get. You can develop ulcers from this.

About 40% of those with autoimmune gastritis also have Hashimoto’s Disease. That’s a fairly high number! As I’ve mentioned before, when you have one autoimmune condition, you’re three times more likely to develop a second or a third condition.

Unchecked gastritis can cause MORE nutrient deficiencies in the body. Not to mention, it’s very uncomfortable! This is something to be aware of.

Now that you know the likelihood that your throat issues are being caused by a nodule is slim. It’s more likely to be caused by reflux, you can start working towards reducing those symptoms.

Remember, the two greatest causes of reflux are…

Determine which one is your greatest contributor. And work on fixing that one first!

In the comments, tell me what new symptom you learned about was actually reflux!